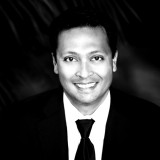 Sharran Srivatsaa is the CEO of Kingston Lane, a push-button technology execution platform for real estate. Sharran is a sought after keynote speaker and a respected thought-leadership resource for publications such as the Wall Street Journal, SUCCESS magazine, Huffington Post and Forbes. Most recently, he grew Teles Properties by 10x in 5 years and led its acquisition to national real estate powerhouse Douglas Elliman, after which he served as the President of Brokerage for the Western Region.

Sharran worked on Wall Street with Goldman Sachs and Credit Suisse, in Silicon Valley with startup companies, and around the world at Four Seasons and Ritz-Carlton resorts. In addition to being a member of Young Presidents Organization (YPO) and founding the 5am Club for Entrepreneurs, Sharran serves as co-founder, investor, and advisor to various real estate technology companies. Sharran received his bachelor’s degree in Computer Science and MBA with Honors from Vanderbilt University and he lives with his family in Orange County, California